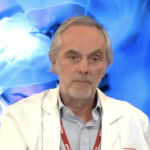 1987 Board Certification in General Surgery University of Liege, Belgium